Füchse on the hunt for another trophy

The goal is making it to the EHF Finals 2022. But their dream is to lift another trophy.

Füchse Berlin are among the main contenders for a place at the season-ending tournament of the EHF European League Men.

One particular transfer – Viran Morros arriving from Paris Saint-Germain HB – has increased the German side’s hopes for a bright season.

Most important question: Will Füchse go all the way?

Obviously, the goal is again to go all the way. Füchse belong to the favourites and they underlined their strong current form with six wins and a draw in their first seven matches of the Bundesliga season. But other contenders, including defending champions Magdeburg, SL Benfica, HBC Nantes, and Orlen Wisla Plock, look strong, too.

Key element of the road to the EHF Finals is finishing on top of the group, resulting in a likely easier path through the knock-out phase. Füchse, Plock and Fenix Toulouse – Füchse’s opponents in round 1 on Tuesday – seem the main candidates for top spot in group A. In terms of the squad, Füchse are the favourites, but the long post-Olympic Bundesliga season might become a burden for some players.

For manager Bob Hanning, who just stepped down as vice president of the German Handball Federation, the goal for the new season is clearly set.

“For us it is always about the EHF Finals. Therefore, we need a perfect placement in the group phase. Only European competitions count for Berlin. If we want to strengthen our sport in a strong environment where all team sports are very important, we must also play a role in Europe,” said Hanning, referring to strong football, basketball, ice hockey, and volleyball teams in the German capital.

For team captain Paul Drux, who is back after several injuries, the goal is the same: “We played the EHF Finals last year and of course we want to achieve this goal again. But the opponents in the current season are even better than last year, a lot of teams already played Champions League. But of course, we want to be the contenders.”

Under the spotlight: Viran Morros

It was one of the biggest surprises on the transfer market this year when Füchse Berlin announced the signing of Viran Morros. The 37-year-old Spaniard played for Paris Saint-Germain HB in recent years, but failed to add another Champions League trophy to the three he had won with Ciudad Real and FC Barcelona. It was even uncertain whether Morros would continue his career, but then the defence expert decided to join Füchse.

The double EHF EURO champion (2018 and 2020) and world champion (2013) finished his national team career at the Olympics last summer – though the farewell came earlier than expected after he tore a muscle in the group phase in Tokyo.

Morros had his debut for Füchse in their first international match of the season, when they beat Azoty Pulawy 32:24 in qualification for the EHF European League. Together with Paul Drux, Mijajlo Marsenic or Marko Kopljar, Morros will form one of the best middle blocks in the competition.

While the number of their domestic titles as rather moderate – no league title, one cup triumph (2014) – Füchse have been collecting international prizes at a higher pace. They won the EHF Cup in 2015 and 2018, and won the IHF Super Glove twice – even one more time than Kiel.

At the age of 26, Jaron Siewert became the youngest coach of a German Bundesliga club last season. Now 27, the age gap to the oldest coach in the European League is 48 years, as Chekhovski medvedi’s Vladimir Maximov is 75. Seven players of the Füchse squad are older than their coach. 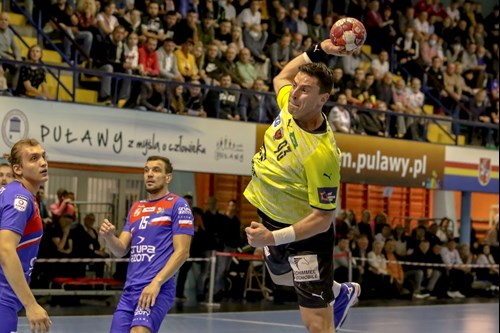 Next Article MOTW with Barça and PSG among round 5 highlights

NEWS: The match officials for the final tournament of the EHF European League Men in Lisbon have been announced

NEWS: The sale has started with tickets available for one or for both days of the 28/29 May tournament in Portugal

TALKING POINTS: What will we remember from the Energi Viborg EHF Finals and the EHF European League season?

“I did not expect to be MVP, because we were a team”

FEATURE: 28-year-old left back Xenia Smits received the MVP award of the Energi Viborg EHF Finals after a superb game in the final

SUMMARY: A minute-by-minute rundown of the Energi Viborg EHF Finals. Bietigheim clinched the title ahead of Viborg; Herning-Ikast secured th…

FINALS PREVIEW: There can be only one winner when two undefeated teams, Viborg and Bietigheim, face off for the trophy on Sunday

SEMI-FINAL REVIEW: Taking advantage of the home court, Viborg qualified for the trophy match with a 28:24 win against CS Minaur