Ahead of throw-off of the Women's EHF EURO 2022 in November, eurohandball.com is publishing a series presenting each of the 16 teams participating in the final tournament. Today – on German Unity Day: Germany.

Germany have qualified for the Women’s EHF EURO for the 15th time – and again, it is their dream to make it to the semi-finals, a stage they last reached in 2008.

New coach Markus Gaugisch, who is also coaching German champions and EHF European League winners SG BBM Bietigheim, is entering his first major tournament, counting on a rather young but still experienced squad which will face Poland, Montenegro and Spain in the preliminary round.

Three questions ahead of the Women's EHF EURO 2022:

- What is different with Markus Gaugisch as the German coach?

Before Germany’s last EHF EURO Qualifier against Greece in April 2022, Gaugisch replaced Dutch coach Henk Groener at the helm of the German national team. In terms of tactics, Gaugisch builds on the active defence system, but has started to change the way of attacking: more speed, more easy and straight attacks – like the playing system that helped Bietigheim become the (inter)nationally successful team they currently are.

A Bietigheim block is also part of the national team, which makes it easier to adapt. Gaugisch’s mission is to qualify for the 2024 Olympic Games and to win a medal at the 2025 World Championship, co-hosted by Germany and Netherlands. After this season, he will only focus on the national team.

- Who are the stars in the German team?

Two key players, both with EHF Champions League teams, will miss the EHF EURO 2022: FTC right back Alicia Stolle has broken her hand – in a match against Bietigheim, and Team Esbjerg goalkeeper Dinah Eckerle is pregnant. While the goalkeeper position is strong with Katharina Filter (København) and Isabell Roch (Valcea), the only internationally experienced right back is Julia Maidhof (Bietigheim).

In general, the two team captains – Dortmund centre back Alina Grijseels and FTC left back Emily Bölk – are the leaders of the pack, but several other players can have their impact on the EHF EURO as well, like line player Meike Schmelzer (Braila) or defender Xenia Smits (Bietigheim), the MVP of the EHF Finals 2022.

Germany have been close to almost every semi-final at major events since 2018 – but have always just missed out on them. At the EHF EURO 2018 they came up one goal short against Hungary, at the 2019 World Championship it was one goal against Serbia. At the EHF EURO 2020 they ‘only’ had to beat Croatia to go through, but lost. And at the 2021 worlds in Spain, they clearly led the hosts in the quarter-final but ultimately lost and missed the semis again.

At the EHF EURO 2022, Germany will avoid Scandinavian teams in the preliminary round and main round, but the likes of Spain, France, Netherlands and Romania are in their half of the draw. That makes for a steep path into the semi-finals.

However, in two test matches in France last weekend, Germany had two unlucky and close defeats: 34:31 and 30:29. 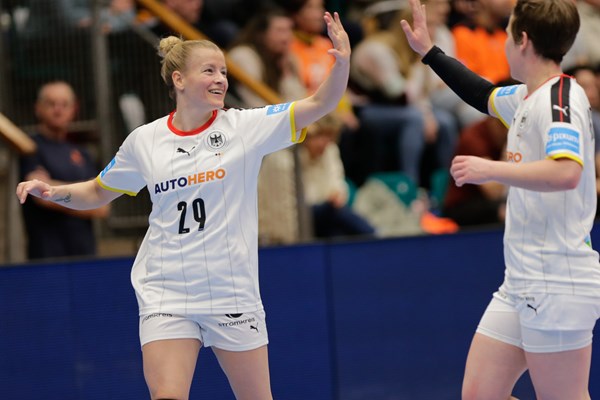 The heart of the team: Emily Bölk

Approaching her fourth EHF EURO, Emily Bölk has handball in her genes: her mother, Andrea, was world champion with Germany in 1993 and was part of the only German team that earned an EHF EURO medal – in 1994. Emily had her debut in the Bundesliga at the age of 16, was MVP of the U18 World Championship in 2014, and had her national team debut at age 18. Eventually, she became the youngest national team player to score more than 200 goals for Germany. After starting her career at Buxtehuder SV and moving to Thüringer HC, she joined FTC-Rail Cargo Hungaria in 2020.

Going into her first EHF EURO, Katharina Filter is also Germany’s No. 1 goalkeeper in beach handball. Last year, she was awarded best goalkeeper at the Beach Handball EURO 2021 in Bulgaria, where Germany won gold. In the ‘golden summer’ of 2022, she was a crucial part of the team that won both the World Championship and the World Games.

What do the numbers say?

FEATURE: The EHF documentary “The final whistle 2.0.” and what the “main actors” Tanja Kuttler and Maike Merz say about it

First decisions on the road to Paris 2024

FEATURE: Which European teams have already taken a step towards the next Olympic Games and which teams can follow in 2024?

PLAYER OF THE YEAR: World Championship All-stars become the first fixed nominees for the Men's Player of the Year

MEDIA RELEASE: New show with special guests and handball’s biggest stars will be aired every Monday at 18:00 hrs CET

OFFICIAL STATEMENT: Both the Spanish and the Turkish handball federation were fined for the incorrect implementation of the TV graphics duri…

Great Britain advance to next round of EHF EURO 2026 Qualifi…

DAY REVIEW: Great Britain advance to the next round after giving Malta a 44:14 defeat and Cyprus were unable to overcome the difference

DAY REVIEW: Two sides level on three points with one round of EHF EURO 2026 Qualifiers phase 1

DAY REVIEW: British comeback earn them a draw with Cyprus as qualification for the Men’s EHF EURO 2026 has started