Grafenhorst: “We are ambitious and humble newbies”

When SC Magdeburg host Paris Saint-Germain in the third MOTW of the Machineseeker EHF Champions League season on Wednesday (20:45 CEST, live on EHFTV), the match will bring back some very old memories. Never before have the sides clashed in the Champions League, and their only duels were back in the 2004/05 season when SCM won 30:25 at Paris and 36:23 at home in the third round of the EHF Cup.

“I really had to research those particular matches against Paris, but now I remember some things - like that we faced legendary Paris goalkeeper Bruno Martini. For me as a young boy, it was a huge honour to play against him,” says Grafenhorst, now 38 years old.

Former left wing Grafenhorst is a legend at Magdeburg, as he only played for this one club, and after finishing his career in 2017/18, he started in his new roles, still for the same club. Looking back on his international career, Grafenhorst remembers his second ever match for the SCM senior team most, back in March 2003, when a draw against Portland San Antonio was not enough for the German side to proceed from the quarter-finals after 26:22 defeat on home ground.

“I was 19 and could play against my big idol Jackson Richardson, this was unbelievable for me,” Grafenhorst looks back.

One season later, he played a crucial role when SCM won the second leg of the Champions League semi-final against their German rivals SG Flensburg-Handewitt 36:26 and was still left in tears as they failed to make it to the final on the away goals rule after losing 20:30 at Flensburg.

In 2005, the same fate awaited SCM as they lost the EHF Cup Final against TuSem Essen (GER) by a single goal over two legs (30:22, 22:31). Finally, in 2007, Yves Grafenhorst and his teammates were on the winners’ podium after beating Aragon Saragossa in the finals of the EHF Cup.

It has been a long wait to return to Europe’s top table, struggling to break through since their last appearance in the 2005/06 season.

“Kiel and Flensburg were always ahead of us, but we were quite strong in the EHF Cup and the European League,” says Grafenhorst. Several times, he and his side qualified for the final tournaments, and his darkest hour was in 2018, when in his last major event, SCM lost the EHF Cup semi-final on home court against Saint-Raphael. 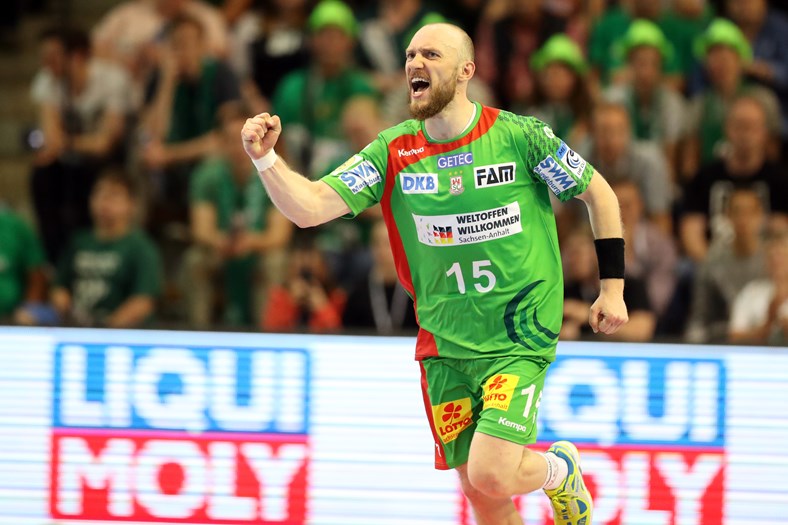 Back in 2021, Grafenhorst returned to the podium, as assistant coach of the victorious squad, which finally took the European League trophy in Mannheim by beating Füchse Berlin, in May 2022, he and SCM lost another final, this time against Benfica at Lisbon in the European League.

But the bitter feeling lasted only for four days, as then his club took their first German Bundesliga championship title since 2001 - and had finally again qualified for the Machineseeker EHF Champions League.

“We were so happy about both the trophy and to have a chance to duel with Europe’s best clubs.

“For many years we had missed out on this big stage. Playing in the Champions League is what the players and coaching staff aim for in their whole careers. And now, with this ambitious team, we hope at least for making it to the knockout stages. But we are newbies in this competition, which means, we have to be humble, as this is another level compared to the European League. Four or five other teams are considered favourites ahead of us.”

"The fans carried us"

The return to the big stage was perfect. Besides winning all five Bundesliga matches so far, SC Magdeburg have the maximum of four points from their group matches against Bucharest and Zagreb.

“To win the opener at Bucharest is anything but easy, ask Kielce - they lost their first group match there one year ago. You never know, what you can expect, and we did not have much information about the team, but finally, we took the points,” says Grafenhorst.

The first home match in 16 years against Zagreb was something very special for all at the club and in the handball-crazy city.

“It was a huge party, as we faced our former player Zeljko Musa and big names such as Timur Dibirov and Ivan Cupic. The fans carried us on their wings to this clear win and this is what we hope for the match against Paris as well.”

Grafenhorst is mainly looking forward to meeting two particular PSG players: “Our fans will give a very, very warm welcome to Jannick Green, our former goalkeeper, who was part of all major successes of SCM in the last years. And personally, I love to see Nikola Karabatic playing in our arena.

“We are of the same age, we duelled already in the youth and junior national teams, but of course, he was already that good, that he always played in the older age group. I have to say chapeau, Nikola, as he still is playing on the highest level, despite his age.”

But does the assistant coach estimate his side to be the favourites against the star-studded PSG team?

“It is our aim to win all home matches and we really hope to count on our great fans as they know exactly when we need them as our eighth player. Budget-wise, PSG are the favourites, maybe also on paper, but we play at home, which might be our advantage.”

SUMMARY: Continuing coverage of this weekend's matches from round 7 of the EHF Champions League Women group phase 2022/23