The winter break in international men's club handball came to a close as the group phase of the EHF European League Men 2021/22 resumed with round 7 on Tuesday night.

We now just await 6 teams before boarding for the Last 16 is complete! Exciting times ahead, join us next Tuesday when we will be inviting more teams to the knock-out rounds and as teams jostle for a better finishing ranking!

Two must-read match reports are from teams who kept their hopes alive tonight. Tatybanya with their one-goal win over Athens. While Irun can also dream on of a Last 16 spot with them now sitting on six points in group A.

GROUP A REVIEW: Bidasoa made a huge step towards the Last 16, while new coach Radoslav Antl fails to make an immediate impact.

Tatabanya KC win by one at home (25:24) and are now tied with AEK Athens in the Group D

Below you will find some of the match reviews from tonight's matches, the rest can be found under news!

Nantes cruise past Cocks on their way to the Last 16

GROUP B REVIEW : Thanks to an impressive win against Cocks, Nantes booked their ticket to the Last 16, eliminating the Finnish side in the m…

GROUP A REVIEW: The French side take two important and unexpected points in the Last 16 race

GOG qualify for the Last 16, eliminating Chekhov in the proc…

GROUP B REVIEW: By winning tonight against Chekhov, GOG booked their Last 16 ticket while eliminating their opponent at the same time

Plock easily proceed to the Last 16

GROUP A REVIEW: Orlen Wisla Plock are the second team from Group A to book their ticket for the Last 16 after Füchse Berlin. On Tuesday, the…

So, after our evening's second round of matches we have more Last 16 berths to announce.

Joining SC Magdeburg, GOG, Nimes, Nexe, Plock and Füchse Berlin we now have Benfica, Lemgo, Sävehof, Nantes with the other sides awaiting more points/results to get their place. Cocks are now out of contention due to their loss today. 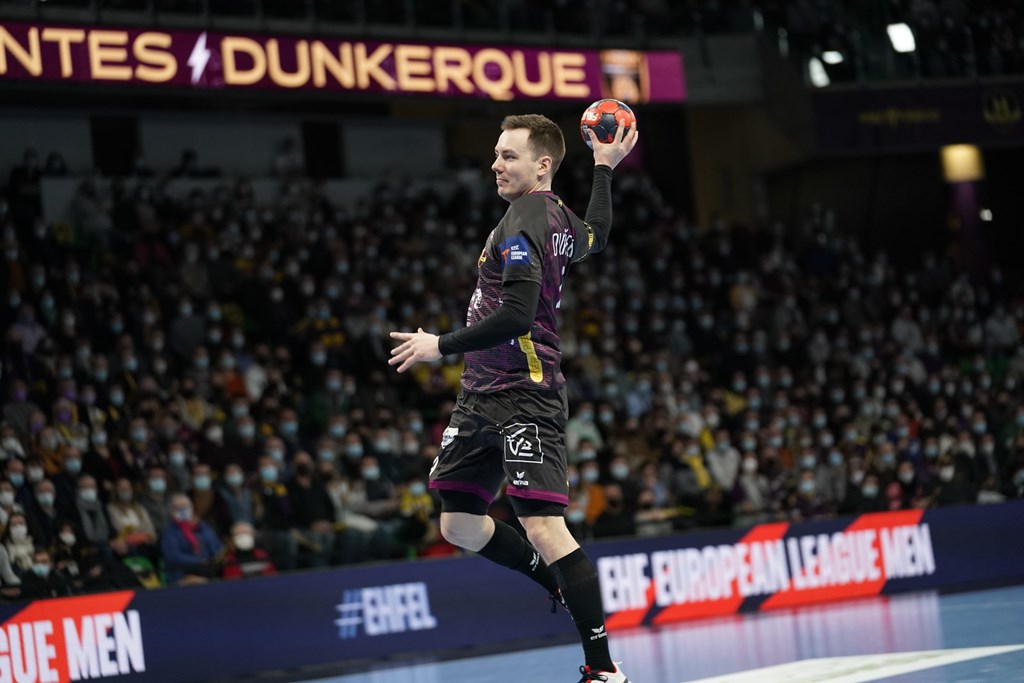 Too big, too strong and too fast. The boys from SL Benfica were better in almost every area tonight. With 11 players making it onto the scoresheet it was a true team performance with highlight performances from Kukic in centre back with his seven goals, Barcelo with his six from six and Moraes on the line with four and Djordjic from the backcourt also with four. Too many to name really, very impressive win.

With that win the Benfica boys have stamped their name on a Last 16 spot, congrats!

This is Benfica's game, they have too much for that Lemgo defense. Lazar Kukic is playing the Lemgo defence like an orchestra. The Serbian international is 7 goals from 8 shots so far. Plus five for Benfica.

WATCH: Good things come to those who wait! Arnau Garcia waited for the right moment to find Rogerio Moraes, who netted for @SLBenfica! #ehfel #moregoals pic.twitter.com/kHKUvc5qRB

While Carlsborgard and Suton are looking sharp, Lemgo's right back position and general right side of the court is very quiet. Andreas Cederholm looks a little bit like a spear part out there tonight he is 2 goals out of 7 chances and it finding it tough against this big Benfica defence.

We are back level between Benfica and Lemgo! 24:24 it stands and it is a delight to behold. Tim Suton(5 goals) and Jon Carlsbogard (5 goals) are looking great and form a great duo from left back and centre back. The switching and powerful one vs one actions are causing the Benfica defence headaches. 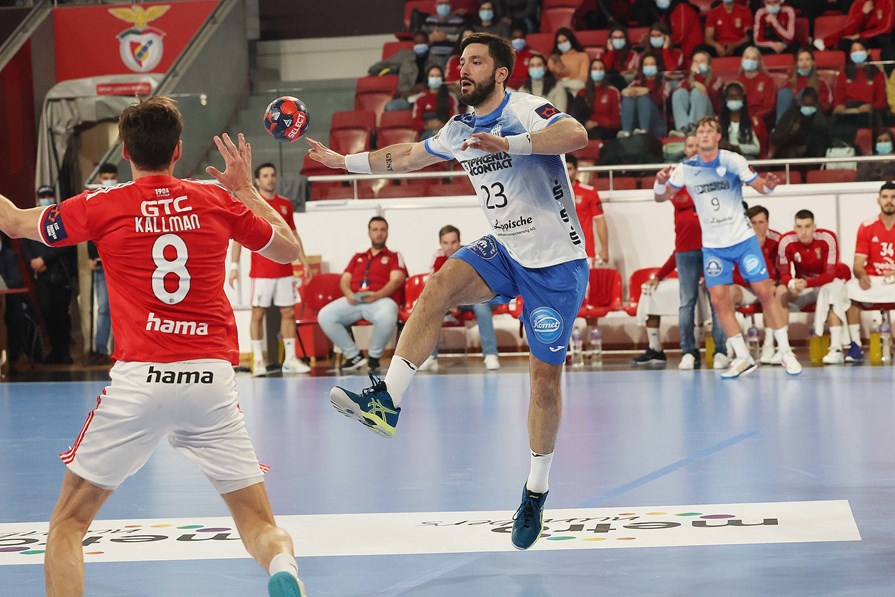 You couldn't pick two more evenly matched sides! This could go all the way. Both sides' backcourts are looking sharp as seen by the last two attacks each. It was a time out for Lemgo and head coach Florian Kehrmann wanted his side to play a concept through fully but space had opened up for Tim Suton on the bakc of a great switch and with loads of space the German blasted in. Just as it looked like the half was over Spanish Arnau Barcelo popped up to pull it level once again 15:15! What a half...

If you aren't watching Benfica vs Lemgo you are missing out! What a start. 10:10 and both sides aren't holding back. It is German Frederik Simak who has been hitting the net most, the 24-year-old has 100% with his 4/4 so far for Lemgo. While it is Peter Djordjic who is again netting most for Benfica, he is 4/5.

The action doesn't stop with our next round of action! Join us now on EHFTV

With those games coming to a close we have a lot of new to report on teams making it to the Last 16!

Congrats to SC Magdeburg, GOG, Nimes, Nexe, Plock on joining Füchse Berlin in the Last 16! Their results this evening mean they stamp their names on a spot. Toulouse will now need just one point from their next matches against Pfadi Winterthur to make it and the Swiss side's result tonight also keeps their hopes alive. Likewise Tatabanya's win keeps them in the race for the knock-out stages.

Due to their loss Chekovskie can no longer make it to the Last 16.

WATCH: @GOGsport are trying to break the @chehmedvedi spirit with beautiful spin shots like this from Kasper Kildelund!https://t.co/AK2CFJBGE2 for the closing stages of all tonight's early games! #ehfel pic.twitter.com/JERoDG9ayh

Wow! Massive scenes here in France with Fenix Toulouse handball handing Füchse Berlin their first loss of their European League season. It was a massive effort by the hosts and they were pushed at the end when Berlin pulled it back to within one but they showed real nerves of steel at the end especially with winger Ayoub Abdi netting a great goal from the wing. Huge step towards the Last 16 for Toulouse!

Elsewhere, Plock only needed a point from their match tonight to stamp their name on a Last 16 spot but the Polish side have fully control of their tie. They lead 33:24. Lovro Mihic has been on flying form with his 6 goals.

WATCH: @SPRWisla are in control of their match with #PfadiWinterthur

Two Hans Lindberg penalties brings Füchse back to within two goals. Jacob Holm is once again in his standing-shot-unleashing fine form. The Dane is 6/8.

We are back in France and Toulouse on fire! They have picked up right where they left off and have Berlin under serious pressure. They 21:17!

So as things stand it looks like SC Magdeburg, GOG, Nexe, Plock all have one foot in the Last 16. 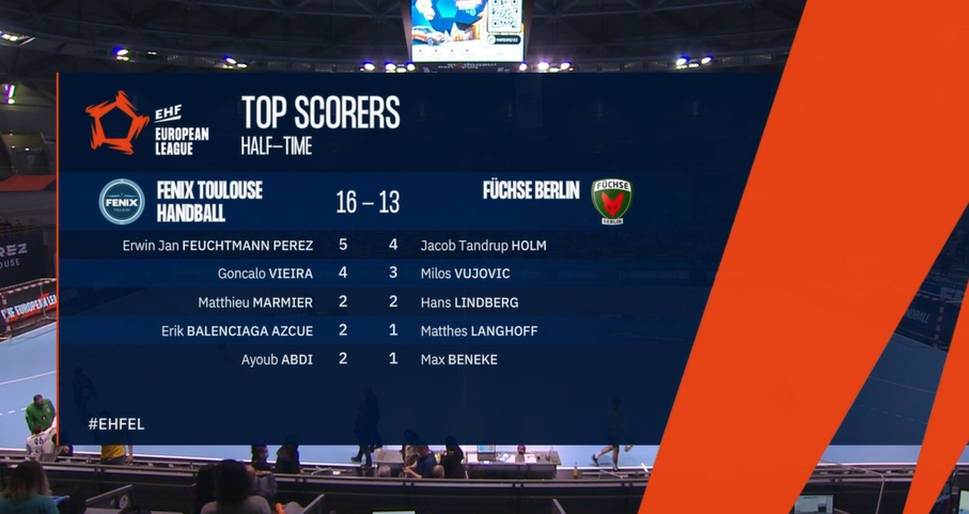 The home crowd love this! Their chants ring around the hall and a huge save from Lettens in the Toulouse goal has the bench on their feet! Their backcourt is really working well against this Füchse defence that looks a bit flat after the first 30. What a first half by the French side! 16:13.

Vieira and Feuchtmann net to give Toulouse the 9:7 lead and it is a time-out for Berlin, game on!

A great start here in France for Toulouse vs Füchse Berlin. It was the Foxes who started strongest opening up a 5:2 lead thanks for Vujovic goal. But from there the French side sealed the holes in their defence and really shaped up better. And a 4:0 run but them briefly in front and since then they have been neck and neck.

So much to play for and you can see it all on https://t.co/AK2CFJBGE2 pic.twitter.com/37eMWgfXSh

With so many good games and important ties when thinking about the Last 16, we keep our eyes peels on Tatabanya and Chekhovskie as they need a win to stay alive in the group. Plock just need a point to make it to the Last 16 but our main focus will be on the Toulouse vs Füchse tie with both sides giving fans a great game in the reverse fixture (32:30 to Berlin).

We are not far not from the first ties of tonight's EHF European League Men action. Coming up at 18:45 we have:

With the Men's EHF EURO 2022 still fresh in our memories, the EHF European League is now returning to the spotlight. A player at the forefront of both competitions is Bjarki Mar Elisson: with Iceland, he became something of a peoples’ champion; and with TBV Lemgo Lippe, he is top scorer for his club in the European League.

Read his interview ahead of Lemgo's clash with SL Benfica in Portugal at 20:45 tonight.

This is the menu for tonight. We are sure it includes some tasty appetisers, spicy main courses, and sweet deserts for everyone: 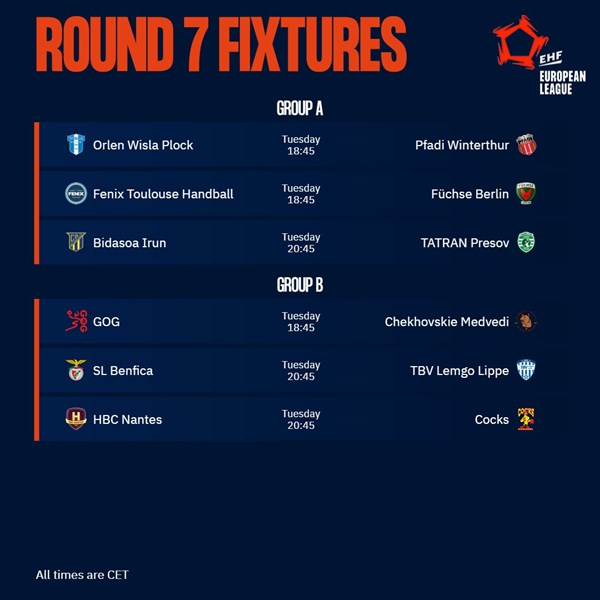 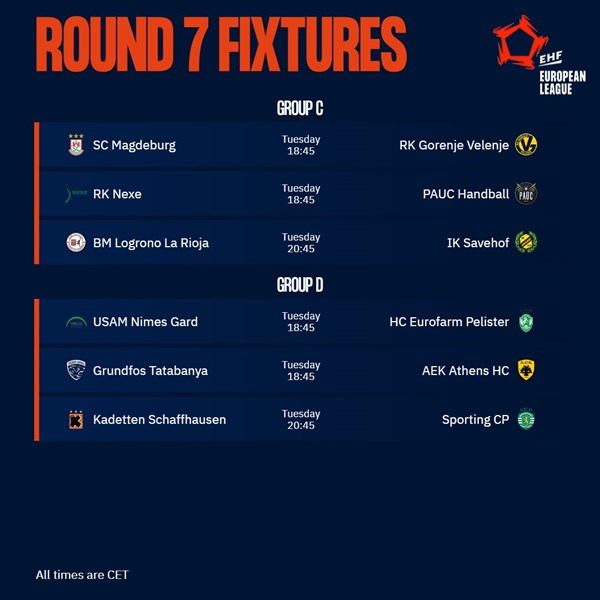 Good afternoon, welcome to the live blog for round 7 of the EHF European League Men 2021/22!

We had one rescheduled match last week - group A leaders Füchse beat Pfadi 30:27 - but today marks the full return of the competition from its two-month winter break.

We got 12 matches in total coming up, with the first seven starting in two hours' time. Read the round preview to learn what is coming your way tonight:

Previous Article Johannes Golla: fighter and leader at both ends of the court

Next Article Plock easily proceed to the Last 16

SUMMARY: The race to the knockout phase has continued in round 8 of the EHF European League Men 2021/22 group phase

Last 16 line-up takes shape in round 8

ROUND PREVIEW: Several of the remaining six tickets to the knockout phase will likely be booked on Tuesday

SUMMARY: Running coverage of all matches in the penultimate round 9 of the EHF European League Men 2021/22 group phase

Last 16 could be fully booked after round 9

ROUND PREVIEW: Teams from groups C and D might claim the four open spots in the EHF European League knockout phase on Tuesday

SUMMARY: Coverage of the second leg in the EHF European League Men 2021/22 Last 16

LAST 16 PREVIEW: The quarter-final line-up of the EHF European League Men will be confirmed on Tuesday

SUMMARY: Titleholders Magdeburg held to 29:29 draw by Sporting as Last 16 is set for exciting second leg next week

LAST 16 PREVIEW: The knockout phase of the EHF European League starts Tuesday with the first leg of the Last 16