After several years of playing in the EHF Champions League without any big success, last season, Orlen Wisla Plock reached the semi-finals of the EHF European League and finished fourth at the EHF Finals.

Now the Polish side are determined to reach at least the same heights, and their biggest goal is winning their first European trophy.

Most important question: can Plock challenge for the trophy?

While domestic rivals Lomza Vive Kielce won the EHF Champions League as recently as 2016, Plock still lack big international achievements. However, last season they did quite well in the EHF European League Men — after topping group A, they eliminated Sporting SP and GOG to become the only non-German side in the EHF Finals.

In the semi-final, the Polish side fought hard against SC Magdeburg, losing by just one goal (30:29), before suffering another defeat against Rhein-Neckar Löwen in the third-place match — so the trophy was not so far away.

In the new season, Plock have reinforced their squad with the goal of progressing far again. In particular, the Russian duo Dmitry Zhitnikov, who returned to the club after a four-year absence, and Sergei Mark Kosorotov are expected to play important roles, so Wisla can again dream of reaching the finals or maybe even lifting the trophy.

Under the spotlight: Sergei Mark Kosorotov

22-year-old left back Sergei Mark Kosorotov stands out as one of the best young players in Europe.

The Moscow-born player became a key figure at Chekhovskie Medvedi and for the Russia national team, and now he decided to start a new chapter in his career. In fact, Kosorotov signed with Plock, his first foreign club, as early as 2020, but moved to Poland one year later.

“I’m very glad that we have progressed to the group stage. Last season, we reached the finals and gained a lot of experience. Now we are a stronger team, and we want to show our good side again,” said team captain Michal Daszek, who is starting his eighth season at the club.

Xavi Sabate, who has been working at Plock since 2018 and has recently extended his contract until 2024, is the second Spanish coach in the club’s history. The first was Manolo Cadenas, who coached Wisla between 2013 and 2016. 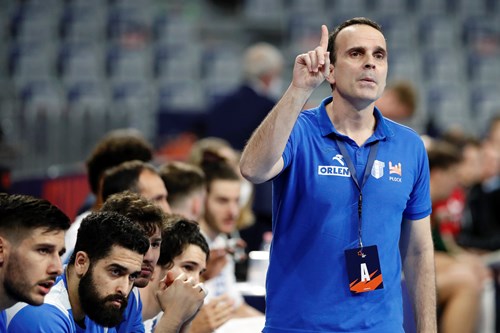 Although Plock are seven-time Polish champions, their last title dates to 2011. After that, the team has been runners-up in the Polish league for 10 straight seasons — each time behind top rivals Lomza Vive Kielce.

Next Article Ten Holte: “Nobody expected us to get so many points”

GROUP D REVIEW: After their game against Viborg last week was postponed, SCM Ramnicu Valcea earned their first win of the group phase

GROUP B REVIEW: The title holders were close to their second loss in a row, but mounted a last-gasp comeback to take a 27:26 win against MKS…

GROUP D REVIEW: The Danish side, who had been seeded directly into the group stage, opened their campaign with a victory

GROUP A REVIEW: 22 scored goals were enough for the Hungarian team to celebrate a win at Lokomotiva

Sola too strong for Besancon

GROUP A REVIEW: Plenty of goals as Norwegians claim a seven-goal victory away in France

GROUP C REVIEW: After a slow start the Norwegian team claimed a five-goal win against Lada

GROUP B REVIEW: SG BBM Bietigheim are in firm control of the group, after securing a lopsided 39:20 win against CS Minaur Baia Mare, the wor…

Next test for Bietigheim as group phase enters round 2

ROUND PREVIEW: German side plays last season’s EHF Finals hosts Baia Mare as round 2 features six matches on Saturday and two on Sunday